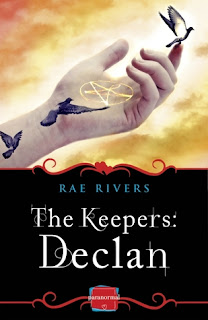 Declan Bennett has zero tolerance for thieves. He and his brothers, the Keepers, are fiercely protective of their witch, Sienna, and their privacy.
So when Kate Carrigan breaks into their estate, he'll be damned if he lets the little wildcat get away with it – especially after she seduced him three months ago, leaving him buck-naked in a New Orleans hotel. Declan wants payback – and some answers.


Before she was murdered, Kate's mother ingrained it in her not to trust anyone. Kate’s magical powers make her a pawn in the war between good and evil, a war she’s always avoided. Declan is everything she’s been taught to fear, even if she can’t forget the memory of his touch that one night…
Trouble is brewing as the powers of evil regroup – bolder and hungrier than ever – and Kate is forced to choose a side.
Hot romance, epic battles and action abound in Book 2 of The Keepers.


Right off the bat we are thrown into a tension filled scene where Kate is trying to steal from supernatural warriors and I have to say, I love it when books start like that. I also loved the fact that Kate is a badass. She can fight with the big boys and win. Not only did the first chapter spike my interest, but it also made me laugh, which is a bonus point towards The Keepers. Another thing that I loved about this book is the fact that it is partially set in New Orleans. I love New Orleans, and it always makes for a great setting for the paranormal.
Now for my favorite part, the characters. I loved how unpredictable Kate was because she always shocked me. I also liked the fact that Kate was vulnerable too. She was a fierce heroine, yet she still believed throughout most of the book that Declan only wanted her for her power. It is those kind of vulnerabilities that I can relate to in a character and Kate was really relatable. I really felt for her in this book because everyone saw her as a pawn and not a person until the very end. The whole time I just wanted to shout "SHE IS A PERSON WITH FEELINGS AND SHE MATTERS". Honestly, it irritated me that Declan, the hero of the story, didn't stand up for her like he should have in the beginning and middle of the book. I wanted to throttle him sometimes. All I wanted was for him to say that Kate mattered because he cared for her, not because of her powers. Speaking of her and Declan, the tension between them was delicious. You can tell those two will either kill each other or fall in love. Watching her battle it out back and forth with him was just entertaining as hell. Those are always the most interesting couples to read about in my opinion.
Now for the nitty gritty. This was a romance/action book that I needed. I love books featuring strong heroines who have a knack for being reckless and gorgeous heroes who are extremely protective but still deny their feelings. This paranormal romance was practically made for me. I loved the balance of action and romance this book had. It's not over done and that is sometimes easily done with romance books. The author builds tension between Kate and Declan and at some point they were bound to explode. The action in The Keepers was amazing, and the fight scenes had me on the edge of my seat. Rivers knows how to write a fighting scene that is for sure.
All I have to say is that if you love paranormal romance, witches, protective gorgeous men, a heroine that is fierce, and a book filled with both action and romance then this book is for you. It is going on my favorites list for sure. I give it five out of five starts.
P.S. This is the second book in The Keepers series; however, it can be read by itself.
Posted by Ivey
Email ThisBlogThis!Share to TwitterShare to FacebookShare to Pinterest